Scientists from the University of Girona have successfully isolated breast cancer stem cells using additive manufacturing. This investigation has been considered a very important milestone in the research of triple negative breast cancer, one of the most aggressive cancers with a high relapse rate.

Using the 3D printer BCN3D Sigma, the research team has been able to manufacture three-dimensional scaffolds that recreate those structures found in the tissues and fibers of the body. These 3D scaffolds are able to separate the stem cells, responsible for causing relapses, in order to study them later for the purpose of devising pharmaceuticals capable of eliminating them without affecting other cells and avoiding the occurrence of relapses in patients.

A research team from the University of Girona has managed to isolate stem cells from one of the most aggressive breast cancers through an additive manufacturing system. The goal of isolating these cells is to facilitate the investigation to the laboratory and find a drug that exclusively attacks these cells and that does not damage healthy parts of the body, therefore preventing patients from suffering a relapse. 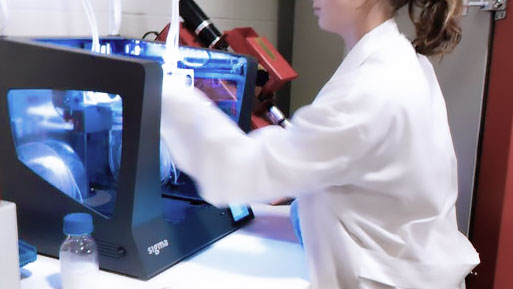 Dr. Teresa Puig, one of the researchers directing the project, explained that these tumor cells still remain in the body after treatment via chemotherapy or radiotherapy and that they are responsible for the reappearance of the disease. According to Puig, the cancer being researched is the triple negative subtype, which occurs in young women and leads to relapses within three or four years in 20 or 30 percent of patients.

“A tumor is made up of many types of cells, and these are the cells we have in low proportions. Therefore, it is complicated to locate these cells within the tumor. This new system is cleaner, allowing us to work more directly with these types of cells later,” says Teresa Puig, director of the Oncology Unit of the Group for the Investigation of New Therapeutic Targets.

To accommodate an optimal three-dimensional cell culture, the main aim was to develop a scaffold architecture which affords a high breast cancer cell proliferation rate. For this purpose, several values of the selected parameters (layer height, infill density, infill pattern, infill direction, and flow) were tested on the slicing software BCN3D Cura to find the optimal ones and 3D printed using the BCN3D Sigma. Using the Taguchi experimental design method, twenty-seven scaffold configurations were manufactured and then analyzed. To perform the characterization and cell proliferation assays, at least ten copies of each configuration were printed. The objective of the study has been to see which geometric form was most effective in separating the stem cells, the cells responsible for leading to the relapses.

“This structure is a mesh that, on the basis of a series of parameters such as porosities, spaces, and the distance between one element and another, is ultimately able to allow cells to stick to the matrix or not, to grow, and to be able to ‘enrich themselves’, as our colleagues say,” explains Joaquim de Ciurana, director of the Research Group on the Engineering of Products, Processes, and Production.

Prior to this investigation, these cell cultures were produced two-dimensionally, which did not allow the cells to be effectively separated, and therefore, specific pharmaceuticals could not be produced to attack these cells.

Now, after isolating the stem cells of this sub-type of breast cancer, the researchers will be able to study them in greater depth to find the bio-indicators responsible for the tumors and will be able to attack them using pharmaceuticals. “We still do not know how to treat them, but we have found a way to isolate them,” says Teresa Puig. This biomedical engineering project created using 3D printing, known as ‘ONCOen3D’, has also allowed reducing the costs of the traditional methodology of analysis, and therefore to increase the experiments carried out with cancer cells.

The results of the study have been published in the scientific journals ‘International Journal of Molecular Sciences’ and ‘Polymers’, and have been presented at international congresses. The research has been funded in part with money from La Marató de TV3. In this document, a detailed report on the investigation can be found.

3D printing is a cutting-edge technology that has been widely used in many aspects of production...